Astra Howard is an Action Researcher/Performer working predominantly within public spaces in cities.  Since 1998 Astra has designed and produced site-specific works in cities across Australia, and internationally, including: Beijing, Paris, New York, Delhi, Hanoi and London. After completing a PhD in 2005 titled: ‘Orchestrating the Public: To Reveal and Activate through Design the Experience of the City’, Astra has continued to test urban and social theories in the city spaces they critique.
Undertaking various projects commissioned by city councils, state government departments and community/arts organizations, Astra has designed and directed these projects using iterative research methodologies.  Information is gathered about a location, the data collected and visualised, which in turn generates dialogue and debate amongst members of the public about issues affecting their city.
An evolving series of interactive Machine-Vehicles, disable the normal means of communication in order to heighten the engagement between researcher and members of the public.  By reducing certain sensorial capacities others are enhanced, liberated through concentrated attention.  This altered means of communication encourages direct, honest, sometimes unexpected and often quite intimate responses.  Wheeled quietly in and out of cities (the Trojan Horse Effect), these Machine-Vehicles create the catalyst for and means by which individuals tell their stories of the city.
At the same time as producing these public projects, Astra has worked professionally as a designer in commercial agencies, as a lecturer in higher education and as a community development worker, predominantly in crisis homeless services. 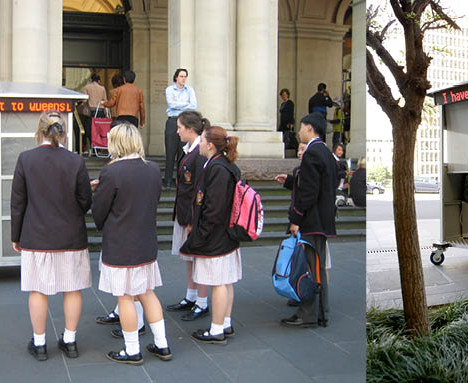 Realism, Fiction and the Machine

Realism, Fiction and the Machine